The Number One Reason to Stay Fit and Race

Posted on March 29, 2015 by The Pretend Triathlete

Being healthy enough to climb a flight of stairs without gasping like you just surmounted K2 sans oxygen is great, but I think we all know that the biggest payoff to being fit and using that fitness to complete races is putting the various decals on your truck. Here’s what I mean: 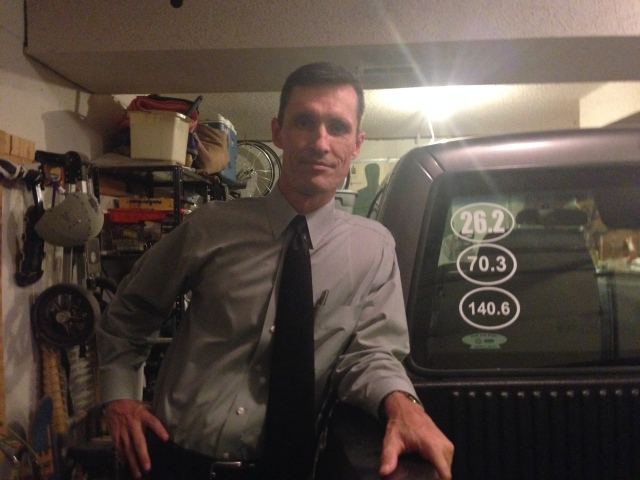 The Pretend Triathlete and His Decals

I posed for that not long after Ironman Louisville 2014. My truck was decal-free until the 140.6 and then I thought, “What the heck? People behind me at stoplights have no idea that I do endurance races. I have to let them know because they care so much!” So I affixed those three decals as soon as I could get them in from Amazon. I have now found, like people who get tattoos, it’s addictive and I’m looking for my next fix. (Just as an aside, I don’t have any tattoos, and I don’t have plans to get an M-Dot on my calf, or anywhere else, not that there’s anything wrong with that.)

Here’s my next decal:

I wouldn’t dream of put putting it on the window until I’ve completed one, but yes, I am signed up for a 50K in September 2015. Like a lot of these 50Ks it’s a trail run. It’s actually in the same park as the 70.3 I completed last year, so I’m returning to the scene of the crime. You can read about my experiences at the Kansas 70.3 here.

Here’s the link to the 50K trail run, if you’re interested. It’s called the Bleeding Kansas 50K. Being held at Clinton State Park outside of Lawrence, Kansas, I suppose it’s appropriate to name it in commemoration of when degenerate slave-driving Missourians came over and fought with freedom loving Kansans. If I don’t bleed somewhere along the way I will feel let down.

So that’s my big race this year. No Iron races, though there are couple of local tris I’ll get in on. I’ll soon begin training to get that 50K decal on my truck, oh, and to do well in the race.

One last thought. It occurs to me that there might be a lot fewer decals if we had to post our times along with them. At least I’d want my time in very small print.

Just a 46 year old trying to stay in shape. Not pro-athlete in shape, just 46 year old guy with a family and a house and a job in shape. Signing up for races is the best way I've found to do that. I blog about things that happen to me and things I observe while training and racing. Let's do this!
View all posts by The Pretend Triathlete →
This entry was posted in 50k, Health and Fitness, Ironman, Running, triathlon, ultra and tagged 140.6, 26.2, 50k, 70.3, bleeding kansas, ironman, ironman louisville, trail run, triathlon, ultra. Bookmark the permalink.