Viva Las Vegas! or, Working Out in Paradise

Posted on July 4, 2014 by The Pretend Triathlete

Last week I was in fabulous Las Vegas. Don’t despair, this isn’t a pretentious travel blog. Lord knows we have enough of those. So I won’t bore you with the details of where I stayed and what I thought of the hotel’s amenities. Instead, this is a pretentious triathlon blog, so I’ll regale you with exciting accounts of my Las Vegas workouts. Fasten your seatbelt and return your seatback to the full and upright position, we’re preparing for our final descent.

I went to Vegas for the stereotypical conference. That was Monday through Wednesday morning. Then my wife and I took a couple of extra days to be tourists. We got in Sunday afternoon, and, since I didn’t want to gamble with trying to find the fitness center in the morning, we scouted it out that evening. We found it, but I was disappointed to see it didn’t open until 6AM. 6AM? I flew west and was looking forward to waking up nice and early and getting a good workout in before the sun came up. So as nice as the conference hotel was, and it was quite nice (too nice for a simple triathlete like me), it already had one strike against it-a fitness center with too late a start.

However, once inside the fitness center the next morning I found that it was a very nice fitness center. They had bikes and treadmills. They even had those escalator treadmill things. I’ve always liked working out on those. They also had free weights, not just those motion restricting Nautilus machines that are so popular with hotels these days.

I eventually made it to the fitness center, but not before a fruitless attempt to jog The Strip. On Monday I woke up nice and early, before the gym opened, so I thought I’d jog down the strip to get a lay of the land. Once outside I saw that there were way too many people out on the sidewalks, still, to even walk in a straight line, let alone try to run. At that hour there were still people coming in and/or going out.

Have you ever heard of the Electric Daisy Carnival? Apparently it’s some kind of music festival. Well I had never heard of it, but it was going on in Vegas that weekend and there were about 10,000 kids running all over the place, getting in this old man’s way. Besides there being so many of them, they were all dressed like this:

I saw one girl, and I’m not trying to be suggestive, I’m just telling you because I thought it was interesting, who, where there would normally be a bikini bottom, had something about the size of a silver dollar, held on with bikini straps. The dudes were also dressed funny but their outfits weren’t nearly as interesting.

So then, I, uh, where was I? Oh yes, working out at the hotel. You know, compared to everything else that was happening in Vegas my workouts probably weren’t that interesting, so let me say I got a good workout in on Monday and Tuesday morning, a decent swim in on Wednesday, and an OK workout on Thursday. I took off on Friday.

But on top of all those workouts my wife and I walked, and walked, and walked. We walked many, many miles up and down the strip, and all over Hoover Dam (yep, we drove down there). We also walked many miles all over our hotel. I swear, and I’m not exaggerating, I think the convention area was a full mile from my room, and it was all in the same complex. It took several days for my calves and feet to recover. That’s why I think being on vacation is an endurance sport.

Just one more thought about being out there. I read the other day that Paradise, Nevada, where most of the Las Vegas strip lies, has the lowest humidity of any town in the U. S. I did all my running on treadmills indoors out there, but I should have gone out on a long run in the Vegas heat. It was quite hot, at least a hundred each day, except Thursday. The local weatherman actually said, “We’re looking at a high of 98 or 99 degrees, so enjoy this cooler weather.” I would liked to have seen how much I sweated or didn’t sweat in that kind of weather. We got back to Missouri on Friday and I went out and ran 13 miles on Sunday, and soaked through two shirts in 71% humidity. Good times.

It is possible to workout on vacations. I’ve blogged about it before. I enjoy getting out of the hotel or whatever to run. It gives you a chance to take in your surroundings in a different way. I’ve found, however, that I can over do it, and by the end of the day be beat, which is fine, but generally I like to be a little more present and energetic when I’m out with the family.

I’m safely back home and have no plans to leave town until Ironman Louisville later in August. I have our room booked and I told the kids to find some things in Louisville they might want to do. I gave them until today and they have yet to give me a list or any ideas. I warned them if they didn’t we’d end up doing the things I wanted to do, which they should know will be pretty boring to them. For instance, while in Vegas we did not see Cirque du Soleil, magic shows, Celine Dion, or even David Spade who was playing at our hotel. We went to the Bodies Exhibit and to Hoover Dam (OK, we did ride the High Roller, a very tall Farris wheel). So it looks like an exciting time of museums and working out while in Louisville.

The Pretend Triathlete at the Bellagio 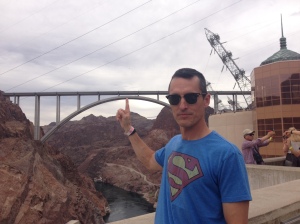 The Pretend Triathlete holds up the Hoover Dam Bypass bridge

Just a 46 year old trying to stay in shape. Not pro-athlete in shape, just 46 year old guy with a family and a house and a job in shape. Signing up for races is the best way I've found to do that. I blog about things that happen to me and things I observe while training and racing. Let's do this!
View all posts by The Pretend Triathlete →
This entry was posted in Health and Fitness, Ironman, Running, Swimming, triathlon, Uncategorized and tagged Las Vegas, Paradise, vacation, Vegas. Bookmark the permalink.